[The following is a piece of flash fiction, originally cut from my short story “Clamp & Fangs.” It should make sense as a stand alone, but for the full story, be sure to check out my Amazon Author Page. I should probably also note that, while relatively mild, there are some adult themes below. You’ve been warned.] 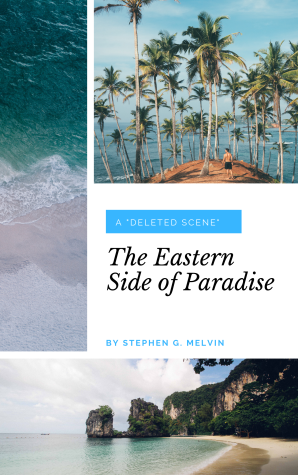 “O, wonder!
How many goodly creatures are there here!
How beauteous mankind is! O brave new world,
That has such people in’t!”

I emerged from the shuttered interior of the houseboat on to the deck, greeting the sunlight with arms stretched above my head. The sea quietly lapped against the hull. Addie and Jazz both sat on the patio table, heads buried in their folded arms. In front of both was a glass of lime-garnished sparkling water.

“How are we this glorious morning, lovelies?”

Jazz grunted, never moving. “Hell is he so chipper?”

“I do find myself charioted by Bacchus’s pards far too frequently. Still, want the only genuine cure for a hangover? Be me.”

Jazz fumbled around until she seized the glass, pulling it against her to cool a parched forehead. “Know the type. Had this sorority sister—”

“You do know Robin, right? Couldn’t tear her away from her nocturnal pursuit of owls long enough to get her plastered.”

“Course not. Your Latin blood is like Superman: recharging your vim via the rays of Earth’s yellow sun.”

Jazz peeked her head up enough to wrap her lips around the straw. After a swill, she lowered it. “Course he’s a comic-book nerd.”

“Did you know there’s a nude beach a few paces up?” I asked, undaunted.

“Knock yourself out. I’ve been.”

“Think I will.” I peered over the railing, squinting into the disappearing coastline.

“Not moving, is he?” asked Jazz. “Chickenshit?”

Addie slouched in her seat. “Enough sauce in him, have to beg him to keep his knickers on. Not quite the exhibitionist when he’s sober.”

“Why are you so interested in the spot anyhow?” Jazz asked.

I deeply inhaled a gust of salty air. “Western society puts all these arbitrary restrictions on us. How exhilarating must it be to frolic in this veritable Paradise of sun and surf, unencumbered by the sartorial trappings imposed by a repressive set of Puritanical mores, to exist—even if momentary and fleeting—in a postlapsarian state of—”

Jazz pointed starboard. “Dirt trail just past the marina. About a quarter of a mile, comes out at beach. Follow the sand another eighth a mile or so, you’ll see a sign that says ‘Clothing Optional.’ Go get an eyeful of all the boobs and butts, asses and elbows, man-wong if that’s your thing.”

I lowered my head, studying the foam that gathered beneath the moored boat.

Addie slapped the table, immediately wincing at the racket. “Jesus H., Irv, how many times I gotta’ tell you, in your flaccid state, you are perfectly respectable? Nothing to be ashamed about. No Ron Jeremy, but who is?”

Jazz finally pulled herself to a seated position. Her head slowly turned to Ad. “You two used to …”

“No,” she said, “just a very weird friendship.”

“Like he’s awfully prone to taking off his pants, and, unfortunately, I happen to be around far too often when he’s so moved.”

I stomped my foot, the reverberations loud enough it made both women grab their temples. “Like you don’t shower and dress with the damn door open.”

“Lets the heat and condensation—”

Jazz pushed her shades up the bridge of her nose. “Now I’m intrigued. Continue.”

“The opposite, in fact. All these … naturists, sun-worshippers, whatever they style themselves, they all go on about it like it’s the most natural, non-sexual experience. Me, I see some bare breasts or … I mean, if Mr. Tally-Ho knows he’s on display, he’s going to bring his A-game. Rise to the occasion, if you—”

“I was wrong. Not the least intrigued.”

“Pure hell at the urologist.”

She turned to Addie. “People wonder why I’m out and proud.”

Addie titled the glass in her direction. “Currently rethinking my own predilections.”

“Men are really that hung up over such an ugly little piece of hardware?”

“How many unsolicited dick pics you gotten?”

“Imagine if it read ‘straight.’”

“Yeah, but dudes get hella’ turned on by girls who like girls.”

Jazz raised a finger, lapsing into full scholar mode. “I suppose we can’t lay all the blame on the XY chromosome. Partly, it’s evolution. You know the male chimpanzee will wave his fully erect penis at any potential—”

Addie clicked her tongue dismissively. “Least his is still sheathed. Look, Irv, if you spout all that bullshit about nature and going back to Eden but you really just want to rubberneck, ever think just about everyone else at that beach is doing the same? Maybe they’re all under false pretenses and really just want to see some flesh.”

Jazz nodded. “Maybe some of the female chimps will even be impressed with your massive erection.”

When I returned to the boat, the women were sipping refilled drinks, but had also placed an elaborate tray of fruit between them.

Jazz glanced to her wristwatch. “45 minutes.”

“How were the apes?”

Addie swiped an unpeeled banana and titled it in my direction. “Hungry?”

I grabbed a slice of mango instead. “There were naked people.”

“One. She was holding up pretty well … for an eighty-year old.” I chewed the succulent pulp and swallowed. “Just no going back to the Garden, is there?”

“Pretty much East of Eden for six millennia,” said Addie.

Jazz rose and picked up the serving tray. “Well, it’s about time for a proper lunch. What are we craving? Sausage anyone?”

They laughed hysterically. I failed to see the humor.

In my “real job” I am currently doing deep dive into a specific area of research: animal-attack fiction from the 70s and 80s. The seminal text is, of course, Jaws. I myself am obsessed with sharks and have been since I can remember. During my research, I came across an interesting biological tidbit about the shark, which I won’t reveal. (You can read the story to find out.)

From there, I had an ending only: no plot, characters, etc. The easiest move was to revisit my go-to character, Douglas Irving, aka Irv. He’s the protagonist/narrator of my unpublished novel Carols of Lonesome Love. He’s name-checked in :”Confines, Wards, & Dungeons.” My fans–both of you–will remember his torrid love affair with Robin Vogelsang in “Amorous Birds of Prey.” I decided that during these events, the ornithologist Robin would call in a favor for her lover, imploring her grad school buddy and ichthyologist Jazz to get Irv in a shark cage.

Thus, the story was born.

At over 7,800 words, it runs a little long as it is. This deleted section pushed it over 8,000. During the editing process I started to note that it also felt shoehorned. It added little if anything to the plot, thematically it was disjointed, and logically it seemed like the place to prune.

(A similar situation spawned “Cooked Goose,”  flash fiction cut from “Amorous Birds of Prey.” That one was more obvious. While the rest of the short story is a typical first-person narrative, the cut scene was a stylistic series of text messages between Irv and his daughter Cordelia. Interesting–to me at least–but jarring when sandwiched in the narrative.)

Plus, here I think I had an 1800-word set-up for one joke. Irv waxes purple about being “unencumbered by the sartorial trappings imposed by a repressive set of Puritanical mores,” using his talent as a wordsmith to mask the truth. Addie, his best friend since his freshman year of college, sees right through it. “He wants to see naked people.” I don’t know how well the joke lands, but I am a fan of bathos.

It’s also perfectly in keeping with Irv’s character. He would be the first to admit that he will look at anyone–male or female, gay or straight, attractive or not, fit or fat–who will willingly show their naked self to him. He passes it off as a writer’s curiosity; what better way to truly know a person intimately and wholly than to see their bare flesh? While some of this may be true, he’s also earned his college nickname of “Irv the Perv.” There are prurient motives at play, as we discover in the conclusion, his exasperation at mostly seeing “man-wong” evident.

I suppose the inclusion of this passage–it would go between “II” and “III” in the text if you are that inclined–might add a little to one point of tension: the male gaze. As writers, particularly heterosexual male ones, we would do well to be informed of the theory and actively look for it during our creation process. If not avoided, it should be used constructively.

In some ways, I think all my fiction plays off the concept and either subverts it (see the opening of “Amorous Birds of Prey” or the bathing scene in “Archer Bob’s,” e.g.) or vilifies it (like the philandering narrator of “A Shaken Shadow“). In a piece like “Fled Is That Music,” the gaze is liberating, but only because it is both welcomed and reciprocated.

Maybe he’s not as sympathetic to readers as he is to me, but I try to make him as human as possible, complete with foibles and failures. While one might be inclined to forgive the lascivious way he stares at Robin’s backside in the first section of “Clamp & Fangs”–they have, after all, just completed a carnal session and she is knowingly, willingly strutting across the room on display–it’s a little harder to buy him pathos when he heads off for the nude beach, even when he’s mercilessly teased by Jazz and Addie.

Whatever the case, it’s out there now. Choose to call it canon or not; I firmly believe that the stories are no longer mine but belong to each individual reader. Your interpretation is the tale itself.

That’s my advice, if you’ve bothered to read this far. Most, I assume haven’t. Still, I am grateful to the two of you.

Stephen G. Melvin is an author, lecturer, and producer who lives in Florence, Alabama. Visit his Amazon Page to purchase all his titles. Give him a follow on GoodReads to interact with him and ask him questions.